The following table lists the profitability ratios based on the FY2009 results of the 5 SGX-listed palm oil stocks.


The numbers in the above table are visually depicted and analysed below: 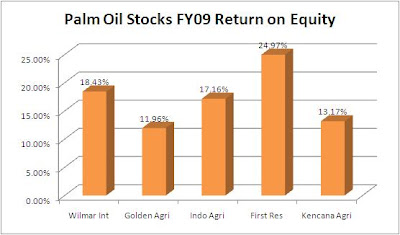 The Return on Equity ratio measures the rate of return on the ownership interest (shareholders' equity) of the common stock owners. It measures a firm's efficiency at generating profits from every unit of shareholders' equity (also known as net assets or assets minus liabilities). ROE shows how well a company uses investment funds to generate earnings growth.

In terms of FY2009 performance, the ranking of the 5 palm oil stocks on ROE, from best to worst, is as follows: 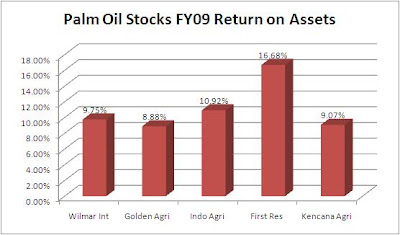 Return on Assets measures how profitable a company's assets are in generating revenue. This number tells you what the company can do with what it has, i.e. how many dollars of earnings they derive from each dollar of assets they control. Return on assets gives an indication of the capital intensity of the company, which will depend on the industry; companies that require large initial investments will generally have lower return on assets.

In terms of FY2009 performance, the ranking of the 5 palm oil stocks on ROA, from best to worst, is as follows: 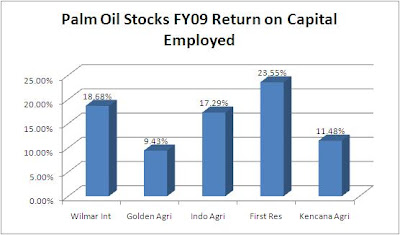 Return on Capital Employed is used in finance as a measure of the returns that a company is realising from its capital employed. It is commonly used as a measure for comparing the performance between businesses and for assessing whether a business generates enough returns to pay for its cost of capital.

In terms of FY2009 performance, the ranking of the 5 palm oil stocks on ROCE, from best to worst, is as follows: 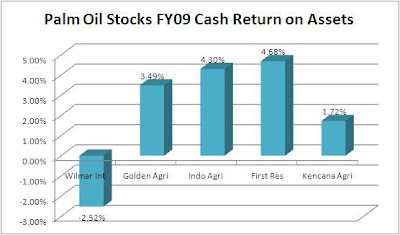 Cash return on assets can fluctuate significantly from period to period due to changes in working capital management. It is best to observe the trend of the CROA over time in order to get a better idea of how the company is performing with regards to its ability to generate cash flow from its assets.

In terms of FY2009 performance, the ranking of the 5 palm oil stocks on CROA, from best to worst, is as follows:
OVERALL PROFITABILITY PERFORMANCE

In terms of the overall profitability performance, based on the financial analysis above, the rankings of the 5 SGX palm oil listed stocks is as follows.
Congratulations to First Resources for outperforming the rest on the Under the Palm Tree FY 2009 profitability rankings!
Copyright by utwt